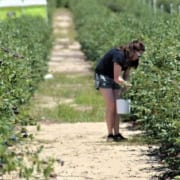 Immigration law in the U.S. is complicated, at best, and changing all the time. The Immigration and Nationality Act (INA), enacted in 1952, contains many of the most important provisions of immigration law. The INA has been amended many times over the years, especially since President Trump took office. While the merits of the Trump administration’s immigration policies are hotly debated, there is no denying that Trump has taken a vocal stance against our nation’s previous immigration policies. In a move seemingly contradictory to this stance however, the administration has been relatively liberal with regard to granting access to one particular group of immigrants — those seeking agricultural visas.

Granting more agricultural visas than usual, while remaining extremely restrictive on the rest of immigration policy, might seem contradictory.  But in reality, this granting of more agricultural visas does support one continued irrefutable fact: that American-born workers do not want the labor intensive jobs that immigrants are ever increasingly and willingly eager to do.  More agricultural visas are being granted in order to maintain this labor force- a labor force with few enforceable rights and where wages are permitted to be kept lower than other industries- e.g., agricultural workers are not even entitled to be compensated time and ½ for overtime.

It seems that while a growing number of agricultural visas are being granted, issuance of other migrant worker visas remain restricted. For example, visas that would have normally been given to tech workers in Silicon Valley remain on restriction. So, why are some employment work visas restricted and not others?  The quick answer is that seasonable agriculture is a huge industry in the United States and farms will try to remain competitive and productive to feed our population. The survival of Silicon Valley is not dependent on migrant labor.

Get Help From an Experienced Immigration Attorney

For more information on your rights as an immigrant in the United States and an agricultural worker, contact an immigration law specialist at Diaz Shafer, P.A.